You know those days that so unusual, they just end up seeming kinda strange, well today was one of them.   It was just a day where I did nothing that I normally do and everything that I don’t.    And even though I love the break (especially the mental break) of not having the kids around, it also makes my day seem unusually strange and quiet.  But I’m happy to say that I took full advantage of it and actually read the complete Pioneer Woman’s love story – you can find it on her website…   Black heels to Tractor wheels… http://thepioneerwoman.com

I really enjoyed the romance and it’s even nicer when you’re reading a story you know is real!  Although I warn you, you might start looking around for your own cow-boy!

And we have our first monarch chrysalis here!   The biggest caterpillar started hanging upside down this morning and when I checked next, he had shed his skin and he was a chrysalis!  So now in 10-14 days we will have our first butterfly!  It`s very exciting. 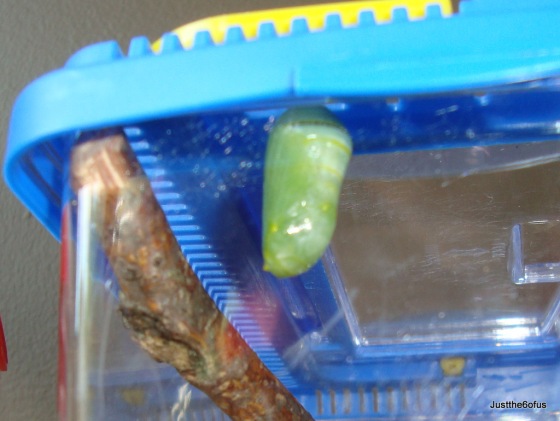 And Erik finished up his Engineering camp today.  He really liked it and said he would attend next year.  But we missed the closing presentation. Apparently even though the brochure says to come between 3 & 4 for a parent’s day open house, it REALLY meant,  come right at 3:00 for a presentation that will be over before you arrive at 3:25.  Oh well, Erik didn’t seem to mind.   And he brought all the things that he made home, so I hope we didn’t miss too much.   We’re glad to be done camp (I felt like I was in the van driving all week) but he had a great time and said he would go again next year.   Thank-you Grandma and Grandpa for sending him!

And poor Soph has a fever.  It started yesterday, but was so low-grade that I just assumed was her eye-teeth that are coming in.  But then when she still had it today, I thought it was maybe the shots she had on Monday, but I called the dr and she called back and said it could be the shots, but more than likely just another virus.  Poor Soph, she was so patient today as I dragged her all over creation.  First to Grandma’s to get Erik (he spent the night) then Erik’s camp, then a friend’s house for tea, then to the bank and finally to the market.  Then home for morning nap.  Then later on back to Erik’s camp.  After supper the drug store (for more Tylenol) and finally the grocery store.  Poor monkey, I hope she sleeps tonight!  Poor crazy haired baby…

But things get back to normal tomorrow when the kids come home and they are all here again and probably exhausted and no Jason for most of the day and a street BBQ to attend in the evening.   I have a feeling I’ll be wishing myself back in my strange day!

3 thoughts on “Kinda a strange day…”