The last few days I can’t really get my mind off of what’s going on in Japan.  With it’s devastation and human suffering, it makes me realize that our lives truly are fleeting (Psalm 39:4) and that we just don’t have as much control over our surroundings as we would like to think that we do.  It’s crazy isn’t it?  We like to feel ‘in control’ and hate the feeling about being ‘out of control’, but how much is really in our control?  I think it’s probably not very much.

So of course I’ve been praying for the people of Japan and especially praying that their nuclear issues would be resolved… that does NOT sound like fun.   I’ve been reading so much about it that I now know more about  nuclear fission than I ever thought I would, not that I understand it.  I guess should get Erik to read it and then explain it to me.

But back to being ‘out of control’ – thing like natural disasters and things going wrong that could kill us like nuclear plants melting down can all lead to fear and I am no stranger to fear.   Jason laughs at me for being scared about everything, but it’s just the brain that I was born with.  I have a good imagination and I just can imagine all the things that could go wrong or the things that could hurt my kids.

Praise the Lord though, I know how to deal with my fears… it’s found here in my favourite verses Philippians 4:6-7…   “Do not be anxious about anything, but in everything by prayer and supplication with thanksgiving let your requests be made known to God. 7And the peace of God, which surpasses all understanding, will guard your hearts and your minds in Christ Jesus..”  So basically a simple exchange of  trading fear for peace,  sounds like a plan to me.    And I am proof that it works.   Am I a basket case of worry? NO.  Would I be without God? YES.  Not to say that I never worry, or that my worry doesn’t get the best of me sometimes, I just know what to do with it.

Kids of course have their own set of fears and I had a little William here last night who couldn’t get to sleep last night because he was afraid of the abominable snow man from Rudolf the Red Nose Reindeer –  a movie that he saw at Christmas time….say WHAT?  I guess no one says fears need to be rational.   So I sang him this  verse, Psalm 4:8 which was put to song by Steve Green, ” In peace I will both lie down and sleep;  for you alone, O LORD, make me dwell in safety.”  It is such a reassurance to me that since safety is from the Lord I (and my kids) can sleep without fear.  Again, it doesn’t mean that bad things won’t happen, but when they do, I know that God has allowed them, they are from His hand and He alone will get me through.

She was up last night with another bout of the stomach flu.  Although I have found out that she is a swallower… after throwing up the first time, she never actually brought up again, because she worked very hard to swallow it back down again.   I just don’t know what to say about that.   It’s probably not a good thing, but it did save me from more laundry, so again, not really sure where I stand on that.

I hope that we didn’t get this little guy sick yesterday. 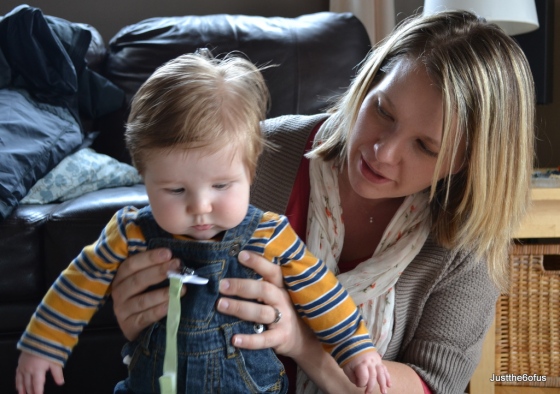 My cousin Janine came for a visit yesterday with her two beautiful children.  This little guy is 6 months and SOOO cute and little daughter Erin is very sweet, but was tired at the end of the visit and really didn’t want her picture taken… but I snatched this one.  She played so well with the kids the whole time she was here, I was really impressed.

Well as I’m hoping and praying that the nuclear reactors will be contained in Japan, I’m also praying that it was just a one person flu-bug this time and it won’t make the rest of my little ducklings here sick, one pukey baby is definitely enough!