So last week saw us head once again to Sandusky Ohio for our second annual trip to the Kalahari – a huge indoor water-park.   We traveled first to my parents and left this one in the tender loving care of Oma and Opa.  Sophia is still a little hesitant when it comes to have fun in the water and so we opt to leave her behind for lots of fun and cuddles with Oma and Opa.

It’s not a bad trip through Ohio even if you are trying to catch up to friends who got ahead of you, but we did catch up and rolled into the Kalahari as a convoy.   The kids are always excited to see this site out their windows… 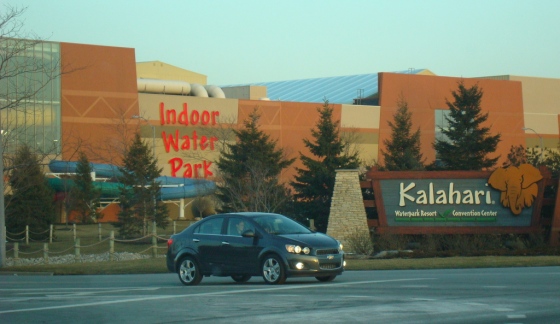 And it is a blast.    However once again I failed to really capture the moments on film, probably because I was too out of breath from climbing flights of stairs to go on just one more tube ride with the kids.    I went on 3 rides that I hadn’t been on last year and we found hot-tubs this year that we didn’t know existed… like how on earth could we miss the hot-tubs?

This year we were looking forward to Sarah being tall enough to go on some of the bigger tube rides with us.  So how do I introduce my little 5 year old to these rides?    I take her on a “zip coaster” ride that’s how!   The only problem was I had never been on this ride and it proved to be rather fast and a bit crazy.     Even though I was extolled the virtues of the ride all the way through (Whoosh… “AUGGGGG!!!!!!  Isn’t this fun Sarah?”) it seems poor Sarah will never be the same again and may never darken the line of a water-slide again until she’s grown.   I guess she can’t been blamed now when she says that her favourite ride is the hot-tub.  Silly mama.

Erik and Will had a blast and never stopped, except when they were hungry.   And since we went with friends this year they had a great going on the rides with friends and trying out rides that I was even to scared to go on.      And we loved having our friends with us, other adults that didn’t have tattoos so that we wouldn’t feel so out of place.  Honestly, this place is tattoo heaven,  everyone and their kids had them (honestly, there were girls that couldn’t have been more than 15!)   We really wonder if people who have tattoos get a deal on their admission.

Oh – I didn’t take many pics, but here is one of the park taken from the window in the hall..

This pic doesn’t even show half of the park!  But it is fun and very watery as Sarah pointed out.  The last morning she was very tired and was pretty sure she didn’t want to get wet again and was saying that she didn’t like the water park because it was ‘too watery’.   Yup, a too-watery water-park.  That’s how you know you are a very tired 5 year old.