Kinda a funny name for a post I know, but it’s all I can think about it.   First off, Ava is having another great day, and she is weaned off her morphine completely!  They are still giving her some Tylenol to help her if she is still uncomfortable with her chest tube and what-not, but it’s so exciting that she’s off the morphine especially since in her hay-day she was on so much that I was afraid she would never been able to wean off her narcotics. 🙂

But now for the most exciting news…  remember how I had mentioned that Ava had chylothorax?   Basically that means that at some point – maybe during her chest closure – her thoracic cavity got nicked and then lymphatic fluid or chyle was leaking in her chest and showing up in her drain tube.  And that’s not good.  That extra fluid can also affect her heart and lungs and that’s very bad especially in a baby like Ava.  So to help her heal, she was taken off my milk and she was getting portagen, this horrid fat-free formula that they typically give for 6 weeks.

It really bugged me that she was on portagen, even though I knew she needed it.  But I also knew that she never had had that much chyle leaking and that there was even some debate about putting her on the portagen in the first place.  So in my complete lack of knowledge of hospital protocol, I got this big idea that since Ava had been on portagen for over a week and still had a chest drain tube in, that maybe they would consider trialing her back on breast-milk.  My reasoning was that since her chest drain tube was still in, it would be an easy way to see if she was still leaking.     One of the nurses encouraged me to ask, especially considering the cardiologist that was on was the one most likely to agree, and so 2 days ago I asked him right after rounds.  And instead of saying ‘no’, he said ‘maybe’.

As you can imagine I was surprised, but pleased, and when he came by later, I questioned him further and from what I gathered, he just didn’t want to do anything that would put her back a step in terms of breathing, and he made it seem like he would consider trialing her on it some time next week.

Yesterday when I went to see Ava,  our nurse that day, Tori, told me that she had some exciting news for me, and that they were going to start trialing Ava back on breast-milk that day!  The next feed in fact.  I was so excited!  So that was yesterday and she’s been on it now for over 24 hours and so far, so good, they haven’t seen any chyle leaking into her chest tube and that’s great news because typically it would have shown up by now.   So please pray that things would continue this way, my milk it’s so much better for her and it encourages me to keep pumping, which is incredibly tedious.

And more good news, Ava is doing very well off of CPAP, she did 12 hours yesterday and she’s been off today since 7 am with no plans to put her back on unless she needs it.

Things are looking up, but again, cautiously optimistic as always. 🙂  But she is so good now that really doesn’t belong in the cardiac critical care unit,  I was teasing her nurse today that I was leaving her with the best paid babysitters ever and I hope he enjoyed watching her sleep.  So different than a few short weeks ago when she was so much work to care for. It also means that within the next few days she should move up to the 4th floor, where the care wouldn’t be as intense and which also means one step closer to going home, praise the Lord!

Wow,  what an incredible and amazing work God is doing in Ava.  And I know that things could turn around anytime and who knows when we will be able to leave, but I’m so thankful for the small mercies, like even allowing her to be back on breast-milk even if only a couple of days and that her breathing has improved so much.

Our sweeet sweet baby… sleeping today in a big girl sleeper since she can actually wear one now! 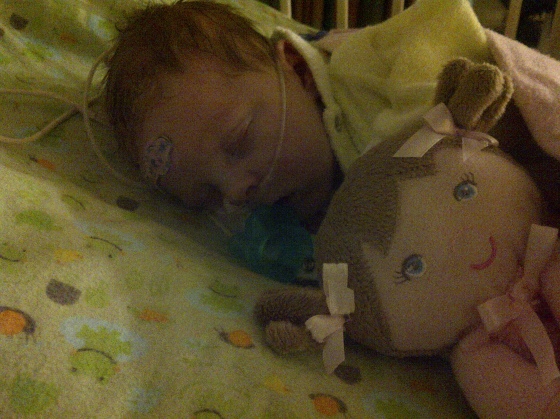 And I shouldn’t forget to mention that yesterday we had a family visit with Ava!   Our nurse and the charge nurse went out of their way to move Ava to a separate room, provide some toys and crafts for the kids and we could all visit with Ava and just relax together, what a blessing.  They have been so good to us at Sick Kids, it really is an incredible place.  As well we had some friends come to visit yesterday it was so wonderful to see some familiar faces and spend time with friends, thanks guys! 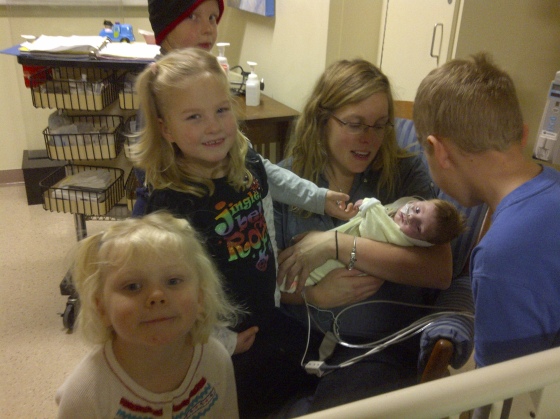 So it’s been a good couple of days, we are counting our blessings and still trusting in a great God!