I’m happy to say that the blood transfusion yesterday did Ava some good and there is some pink in our baby’s cheeks again!    And I just want to say a huge thank-you to all of you who donate blood.  It’s one of those things that you don’t think about until you need it, but then you realize just how important it is.

So now Ava is pinker, but she wasn’t much happier today.  She seemed uncomfortable, but she does have an IV in her foot right now.   Even though she has a picc line, the picc line is being used for her heart meds (milrinone) the picc only has one lumen (port) so had to get an IV for her blood transfusion yesterday.    Sometimes IV’s are fine and sometimes they just really seem to bother her, so hopefully this IV stays open as she needs it for a test tomorrow and then we can take it out.

And Ava is also off her oxygen!  She’s been slowly weaning herself off of it for the past couple of days and so we turned it off later this afternoon.  It’s nice to get the prongs off her face and having her breath room air again, praise God!  See how much better she looks… definitely not as white. 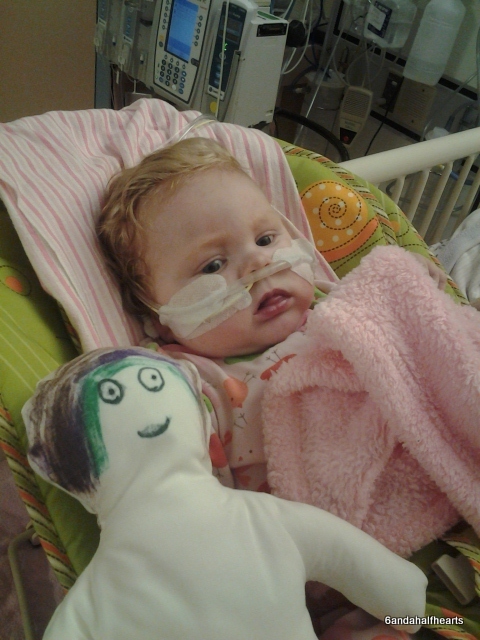 And isn’t that dolly beside Ava a riot?   This afternoon our floor’s Child Life worker took Sarah and Sophia off for a play and they had these dolls that she gave to the girls and they got to decorate them and then they played hospital.  Well as I was told later, Sarah’s dolly had a breaking heart… and then the dolly had cancer and got a few needles.   Sophia informed me that her dolly didn’t have a heart, but that was OK because she didn’t need one. 🙂  Oh my girls, it’s so sweet but sad at what comes out in their play.  (The child life worker and I agreed that the cancer thing is probably something Sarah picked up from living here at the Ronald MacDonald House).

When I tucked Sarah into bed tonight she had her doll and she said that the doll was better now but still had to get a needle every day.  I asked her if the doll had diabetes,  but she said the doll doesn’t have diabetes, just something similar.   Oh my Sarah!!!

We also saw Grandma today as she drove in for a quick visit and Jason and I met with the transplant team’s social worker which was very informative, so the day went by really quickly which is always good.

So even though Ava isn’t quite back to her old self, I’m glad that she is looking better, and hopefully tomorrow will see even more improvement.

3 thoughts on “Some pink in her cheeks”