One of my regrets that I have about the time I had with Ava is that I didn’t write about her in my personal journal.  I just didn’t.  I don’t know why.   Looking back I see that I just did once when I wrote out her birth story – maybe because I did that for all my other children and I didn’t want to exclude her.   But I didn’t write the kind of things that I wished I had written about… things like how it felt to hold her, or touch her soft curly hair, or how I like to gaze at her while she was sleeping.  It makes me so sad that I missed doing that.  I could do it now of course but I want to go back and read about the thoughts I had when she was here and alive…. oh I’m so mad at myself!!!       But somehow through those times even when I couldn’t write personally, God granted me the ability to blog and write publicly.  And I praise God that I have my blog, but it can’t replace my journal and only God knows why I never could or thought to write.

But now that Ava’s gone, I feel the opposite.  All I want to do is write in my personal journal and I can hardly bring myself to blog.   I think a part of that is that maybe grief is more personal and can’t all be shared.   And I know a bigger part is that I’ve now judged my blog to be unworthy… I feel it’s just a glimmer of what it once was and now it’s boring.   Blogging about a journey you are undergoing with a sick child is nothing compared to some occasional thoughts of a busy mom.    And I worry that if I keep on talking about Ava it’s eventually just going to sound like whining… and no one wants to read my whining, not even me. 🙂

So the question is… do I continue to blog and just wait out this non-writing period and hope that inspiration will strike again?   Or do I just can it.  Be done with the blog and  say that it ran its course and it’s over.

While I’m pondering that big question, I will tell you about our trip to Toronto last weekend.  🙂

We had always planned to take the kids back to Toronto so they could go back and visit the Ronald MacDonald House and SicksKids.  And then it just so happened that we were invited to a Remembrance Day hosted by the Sick Kids’s PACT team.  Erik had also been part of a research study last summer at SickKids.  It was a study of children who have siblings who are palliative, and the researcher had called this spring to ask if Erik would complete the study with another interview.   Erik surprisingly agreed to go and do it, so we needed to book a time for that as well.  So then it just made sense to pack it all into one weekend away.

Oh – and also fit in a trip to the CN tower.   We had been given tickets last year when Ava was sick and when we didn’t get a chance to use them before she died, but we knew it would be special to do it on a trip back.    And the kids really enjoyed going to the tower… even though we went in the rain…

But it managed to clear up a bit when we were up and we could still quite far, and it was fun to find places we recognized and watch the Porter jets take off from Toronto island. 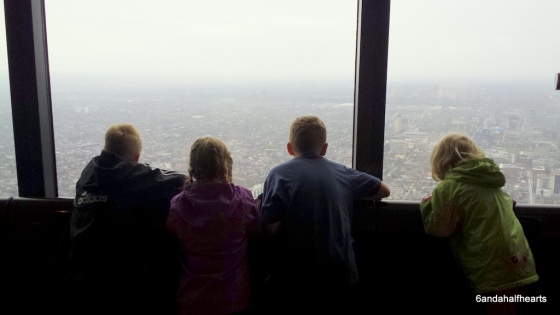 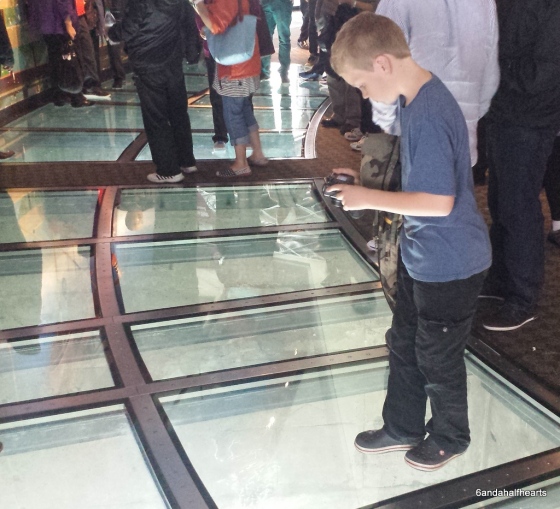 The kids have been able to do so many fun things in Toronto through our Ava journey that I’m glad that many of their associations with her are of good things.   It’s really cool that living in Toronto was very much a positive experience for them.

And visiting SickKids was really good too.   Erik did a great job at his interview.  Last time he told me he answered a lot of the interviewer’s questions with “I don’t know”, so this time he tried to be more creative and say things like “I’m not sure about that” or “I’ll have to think about that”… he’s so sweet.    And it was nice to poke around SickKids and find some familiar faces to say hello too.  It just feels like home when we are there, and that’s where most of our Ava memories are as well.  Some of them are sad, but some are happy too, so I just go with it.  I know that Jason found it emotional being back, but the kids didn’t have any of those worries and just enjoyed doing some of their favourite things like going to play in Marnie’s lounge and getting timbits from Tim Horton’s.

We also really enjoyed going back to the Ronald MacDonald House.   Jason and the kids spent so much time there that I know that they really miss it – the kids kept saying this winter that they wished they were back there.   The timing last weekend must have been God’s timing because our time in Toronto over-lapped by a few hours with good friends of ours from Sudbury.   They had been in Toronto that week for appointments for their daughter who is in remission from leukemia.   We were able to visit them at the Ronald MacDonald House and have lunch with them and we enjoyed our time together so much.  We were saying how we wish we could recreate the Ronald MacDonald House in some way for regular living, as it’s so special and unique, but in the end nothing really does beat living at home.

And then there was the remembrance Day.  The PACT team who helped and supported us so very much as Ava was dying – hosted this day for families who lost a child in 2012 & 2013.  We were so happy to see some more good friends of ours who also came down from Sudbury… they lost their son in September who had hypo-plastic left heart like Ava…it was so nice to have the opportunity to be together and spend time with them.  And there was food and fun, and volunteers to play with the kids and crafts for them to make, and the parents got to talk about how things were after losing a child.   And then at the end of the afternoon we did a balloon release.  The kids had balloons with messages to Ava.  I loved Wills message… “I hope you are having a good time in heaven Ava.  from Will” 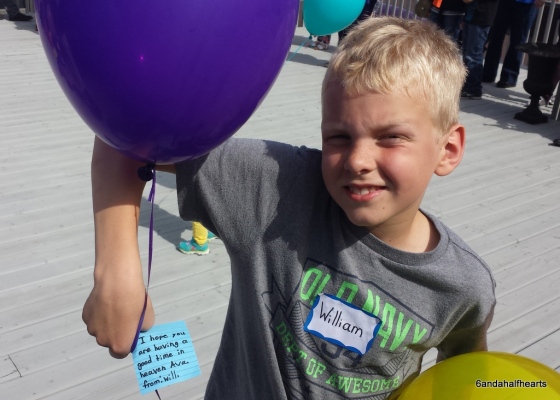 Kinda breaks your heart, but I think I’m pretty good now at suppressing a lot of triggers that might bring me to tears.  I don’t know if that’s good or bad, but it’s rather helpful in a way so I’m fine with it.

So we left Toronto last Saturday thinking a bit more of our sweet baby Ava, and wishing she was here with us.  But on the other hand comforted by the fact that she is no longer suffering and knowing that we will see her once again someday.  OK – funny story… Jason was putting Sophia to bed a few nights after this and Soph was saying how much she missed Ava and wished that she could go to heaven to see her.   Jason reassured her by saying that our whole family would be going to heaven someday to see her, and Sophia replied, “You’re right dad, but you’ll get there much sooner because you are already 41”  HA!  Out of the mouth of babes.

And once again we realized just how much we have to be thankful for.  For the wonderful care that SickKids gave Ava, for an incredible place to stay in the Ronald MacDonald House.  For people’s generosity in supporting us while Jason wasn’t working and we were away from home.  And for all the relationships we gained and the friends we made.   The friends we’ve made have been such a support.   And I wanted to take this moment to mention Tanya – Aleeda’s mom (the little girl who received a heart).   Tanya and I have grown so close from the time together we spent in Toronto.  And we know without a doubt that God placed us together for a reason.   Tanya has been such a great friend to me, and given me so much encouragement and support that I don’t know how I would have navigated this journey without her.   Actually she started her own blog which isn’t so much about her journey as much as it is her thoughts on life… but she posted a wonderful tribute to the nurses of 4D here… it made me all teary.

OK  – I need to stop rambling so I will finish off with a verse.   I have to say once again that our faith in God has been the anchor for our souls through this time of grieving our precious Ava… but knowing that God holds everything is His hands gives us peace and hope.

Oh, the depth of the riches and wisdom and knowledge of God! How unsearchable are his judgments and how inscrutable his ways!  Romans 11:33