Anyone else out there tried bread making?  I’ve made bread sporadically for years, as I’m always drawn back to my childhood memories of my mom pulling freshly baked bread out of the oven and slathering it with butter.  Oh, so good.  But lately I’ve been trying to make a decent loaf of sourdoubreagh bread, and as I’ve learned, sourdough can be tricky!  I’ve been trying for the past few months and I won’t tell you how many loaves of bread have gone STB ( bakers terms for ‘straight to breadcrumbs’) but it was quite a few.  But this week I finally produced something I’m happy with… 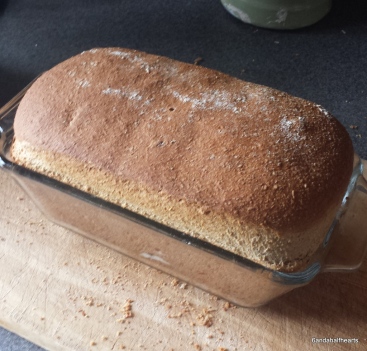 It had good density and rose well and I almost feel like I should whisper this… but I made it all with wheat, maybe 60% whole wheat.  I used wheat from our local mill Arva Flour Mill,  and I couldn’t be happier with the results.

And yes, even though we enjoy other grains in this house such as spelt and rye, I purposely wanted to make a sourdough loaf made from 100% wheat.  This is because even though wheat has been badly maligned lately and given the status as public enemy #1,  I’ve recently read this book and it’s given me a whole new perspective… 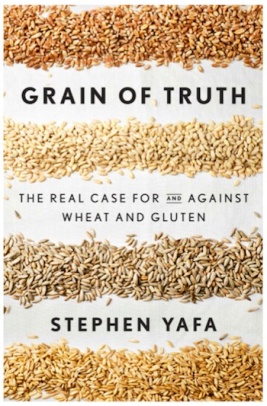 Grain of Truth is a fantastic book and I would say that it’s a must read for anyone who has though of giving up wheat even though they aren’t celiac or non-celiac gluten sensitive.

I learned so much.  Stephen Yafa is a journalist who thought he would take a good look at wheat and gluten and I believe that I walked away thoroughly informed as this man has done his research well.

He first looks at the current North American fad of of blaming wheat and the gluten it contains for all of America’s obesity and health woes.  Who doesn’t love a scapegoat?  But when he reveals some of the pseudo-science behind the thinking and also points out that Italians eat twice as much wheat per capita as the Americas and they don’t have near the obesity issues that we do… what is a girl to believe?

Well one glaring fact that jumps off the page is how we treat wheat here.  Did you know that only 4% of the wheat in the US is milled whole, as in “whole wheat”!!!!!  Now that’s frightening.  The rest is processed  into ‘white flour’ where all the vitamins, minerals and fiber are stripped away from wheat’s endosperm and given to animals as feed, and we are left with a source of quick but short-duration energy from that white endosperm.  That quick energy quickly by-passes your liver and heads straight to your blood steam for a nice quick sugar rush, that is totally devoid of minerals of vitamins, except what has been added back in after the fact so that people don’t get sick. True story.

To get this nice lovely white wheat (that doesn’t even spoil by the way) mills all the way back in the late 1800’s had to switch from milling with stones to rollers to more efficiently separate the wheat from it’s endosperm.  And as the demand for white flour grew, doctors started seeing a rise in coronary heart disease, diabetes and gastrointestinal problems that they suspected were linked to the influx of refined carbs people were eating.  But, and here’s the tragic part…. we kept right on eating it!   Who wants grainy whole wheat when you can have fluffy white.   Except in giving up whole wheat we are also giving up all the health benefits of the minerals, vitamins and fibre.  Not only that, but white flour is typically further refined into worse junk where they add more sugar and fat, increasing it’s glycemic load on our bodies and making us sicker and fatter!  Oh, and that fibre we’re missing out on that’s been stripped away?  Well it’s important to our digestive health.  Not only does it keep things moving along, it also regulates your blood sugar,  and that fibre also provides a lovely home for beneficial bacteria which we need to keep our guts healthy & happy.

And here is why eating gluten free if you aren’t gluten sensitive can come back to kick you in the butt… most gluten free flour doesn’t contain alot of fibre, so it’s also by-passing your liver and heads straight to your bloodstream.  And that’s not good news.

Stephen also talks our current wheat crop – and yes, wheat has been altered.   It had to be to stave off an impending famine in India back in the 1960’s.  The man who gave us the wheat we have today was given the Nobel prize for saving so many lives.  So our wheat today is a cross-breed, known for it’s short stalks and high yield, but it’s not genetically modified (yet) nor does it have more gluten than wheat used to have.   It does have it’s draw-backs, as in the type of fertilizer it needs to produce,  but as it’s feeding millions of people every day, and providing 20% of the world’s daily calories, I think we have alot to be grateful for.  And more and more people are cultivating ancient varieties of wheat and many of them can be sourced locally, so you aren’t stuck with just plain, there are other options out there if you choose.

However, there is another important thing that Stephen talks in his book and that’s fermenting wheat – the result of which is sourdough bread.  Sourdough bread has already been pre-digested in a sort of way by a culture of beneficial yeast and bacteria that are happy to live together.  This culture is formed as a ‘starter’ (you can do it yourself, or even buy ready made starters), and when it’s added to bread dough and left to work it’s magic from 12-18 hours, it ferments the dough, the yeast and bacteria create lactic acid which creates the air-pockets and leaven the dough without adding dried yeast.  And it also breaks down gluten into digestible fragments and over-all makes the wheat more digestible.  And I can even attest to that.  I have known for ages now that refined flour makes me bloat like crazy – especially if that refined flour has more sugar added to it.  Even pasta makes me uncomfortable, but I can eat my whole wheat sourdough bread without any problems – I feel great, it’s nice!

So in my conclusion on my book review here… I would really compare this book to being similar to  Michael Pollan’s book “In Defense of Food“.   Michael used his journalist research to cut through all the differing opinions we hear about food and his conclusion was “Eat Food. Not too much.  Mostly plants.”  And if Stephen had a conclusion from “Grain of Truth” it would be something along the lines of… you can eat wheat, whole, stone milled and preferably fermented. Which is great news for wheat.  And great news for me… I’m going to go bake some more sourdough bread!  Thanks Stephen!

P.S. If you want to try your hand at making your own sourdough starter and sourdough bread – check out this link, email me,  or just ask Google.